Difference between battery series and parallels

A portable device that requires high power is generally powered by a LiPo battery pack in which two or more lipo battery cells are connected in series. If a high voltage battery is used, the size of the conductors and switches can be made small. Usually we will use 24V and 12V batteries. But the 24V battery is expensive, and it produces more arc on the switch than the 12V battery. Another problem with using a high-voltage battery pack is that it is possible to experience a failure of a certain battery in the battery pack. It’s like a chain, the more batteries are connected in series, the higher possibility of that will be. As long as there is a problem with one of the batteries, its voltage will decrease. Finally, the “disconnected” battery may interrupt the delivery of current. However, It is not easy to replace the “bad” battery, as the old batteries and new ones are not matched to each other. In general, the capacity of new batteries is much higher than that of older batteries.

So what are the differences between them?

Although the battery life of the battery pack is enhanced, the damage caused by the short-circuit current is more serious;

Parallel can increase the total current and capacity. 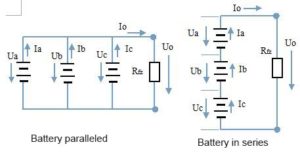 Difference between battery series and parallels

Take an example of a Lithium polymer battery 3.7V 3000mAh, for two of the same LiPo batteries, if it is two cells in series, then the battery pack model is: 7.4V /3000mAh, if it is two cells paralleled, the model will become: 3.7V/6000mAh. When connected in series, the voltage will increase while the capacity does not change. When connected in parallel, the capacity will increase while the voltage keep same. But the batteries we often use are always connected in both series and parallel circuits, such as: three series and four.

The battery is connected in parallel for the case where the voltage keeps same while the current/capacity needs to be increased.

The battery is used in series for applications where the capacity keeps the same while the voltage needs to be increased.

Whether in series or in parallel, the output power of the battery pack will absolutely increase.