what is LiPo battery? 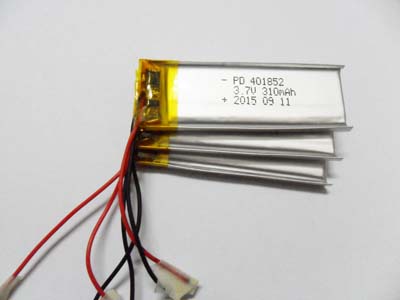 A lithium polymer battery, or more correctly lithium-ion polymer battery (abbreviated as LiPo, LIP, Li-poly, lithium-poly,Li-ion polymer,Polymer Li-ion,Li-Polymer and others), is a rechargeable battery of lithium-ion technology using a polymer electrolyte instead of a liquid electrolyte. High conductivity semisolid (gel) polymers form this electrolyte. These batteries provide higher specific energy than other lithium battery types and are used in applications where weight is a critical feature, like mobile devices and radio-controlled aircraft.[1]

Design origin and terminology
Lithium polymer cells have evolved from lithium-ion and lithium-metal batteries. The primary difference is that instead of using a liquid lithium-salt electrolyte (such as LiPF6) held in an organic solvent (such as EC/DMC/DEC), the battery uses a solid polymer electrolyte (SPE) such as poly(ethylene oxide) (PEO), poly(acrylonitrile) (PAN), poly(methyl methacrylate) (PMMA) or poly(vinylidene fluoride) (PVdF).

The solid electrolyte can be typically classified as one of three types: dry SPE, gelled SPE and porous SPE. The dry SPE was the first used in prototype batteries, around 1978 by Michel Armand, Domain University,[2][3] and 1985 by ANVAR and Elf Aquitaine of France, and Hydro Quebec of Canada.[4] From 1990 several organisations like Mead and Valence in the United States and GS Yuasa in Japan developed batteries using gelled SPEs.[4] In 1996, Bellcore in the United States announced a rechargeable lithium polymer cell using porous SPE.[4]

A typical cell has four main components: positive electrode, negative electrode, separator and electrolyte. The separator itself may be a polymer, such as a microporous film of polyethylene (PE) or polypropylene (PP); thus, even when the cell has a liquid electrolyte, it will still contain a “polymer” component. In addition to this, the positive electrode can be further decomposed in three parts: the lithium-transition-metal-oxide (such as LiCoO2 or LiMn2O4), a conductive additive, and a polymer binder of poly(vinylidene fluoride) (PVdF).[5][6] The negative electrode material may have the same three parts, only with carbon replacing the lithium-metal-oxide.[5][6]

Working principle
Main article: Lithium-ion battery § Electrochemistry
Just as with other lithium-ion cells, LiPos work on the principle of intercalation and de-intercalation of lithium ions from a positive electrode material and a negative electrode material, with the liquid electrolyte providing a conductive medium. To prevent the electrodes from touching each other directly, a microporous separator is in between which allows only the ions and not the electrode particles to migrate from one side to the other.

The exact voltage ratings should be specified in product data sheets, with the understanding that the cells should be protected by an electronic circuit that won’t allow them to overcharge nor over-discharge under use.

For LiPo battery packs with cells connected in series, a specialised charger may monitor the charge on a per-cell basis so that all cells are brought to the same state of charge (SOC).

An experimental lithium-ion polymer battery made by Lockheed-Martin for NASA
Unlike lithium-ion cylindrical and prismatic cells, which have a rigid metal case, LiPo cells have a flexible, foil-type (polymer laminate) case, so they are relatively unconstrained. By themselves the cells are over 20% lighter than equivalent cylindrical cells of the same capacity.[7]

Being lightweight is an advantage when the application requires minimum weight, as in the case of radio controlled aircraft. However, it has been established that moderate pressure on the stack of layers that compose the cell results in increased capacity retention, because the contact between the components is maximised and delamination and deformation is prevented, which is associated with increase of cell impedance and degradation. [8][9]

Six edge shaped Lithium-Polymer-Battery for Underwater Vehicles made by Custom Cells Itzehoe GmbH
LiPo cells provide manufacturers with compelling advantages. They can easily produce batteries of almost any desired shape. For example, the space and weight requirements of mobile devices and notebook computers can be completely satisfied. Also, they have low-self discharge rate, which is about 5% per month.[10]

3-Cell LiPo battery for RC-models
LiPo batteries have just about taken over in the world of radio-controlled aircraft, radio-controlled cars and large scale model trains, where the advantages of lower weight and increased capacity and power delivery justify the price. Test reports warn of the risk of fire when the batteries are not used in accordance with the instructions.[11]

As of mid 2016, LiPo packs of 1.3 Ah exist, providing 95C continuous discharge, and short-time 190C bursts.[12] In March 2017, LiPo packs were available in various configurations, most commonly up to 6400mAh, achieving a maximum 4.2V/cell, for powering certain R/C vehicles and helicopters or drones.[13] Some test reports warn of the risk of fire when the batteries are not used in accordance with the instructions.[14]

LiPo packs also see widespread use in airsoft, where their higher discharge currents and better energy density compared to more traditional NiMH batteries has very noticeable performance gain (higher rate of fire). The high discharge currents do damage the switch contacts due to arcing (causing the contacts to oxidize and often deposit carbon), so it is advised to either use a solid-state MOSFET switch or clean the trigger contacts regularly.

Electric vehicles
Lithium-ion cells in pouch format are being investigated to power battery electric vehicles. While it is possible to use a large number of cells of small capacity to obtain required levels of power and energy to drive a vehicle, some manufacturers and research centres are looking into large-format lithium-ion cells of capacities exceeding 50 Ah for this purpose.[citation needed] With higher energy content per cell, the number of cells and electrical connections in a battery pack would certainly decrease but the danger associated with individual cells of such high capacity might be greater.

Light aircraft and self-launching gliders are being produced such as the Alisport Silent 2 Electro[17] and the Pipistrel WATTsUP.[18] Some larger gliders such as Schempp-Hirth Ventus-2 use the technology for self-sustaining motors[19]

Apple iPhone 3GS’s Lithium-ion battery, which has expanded due to a short circuit failure.
LiPo cells are affected by the same problems as other lithium-ion cells. This means that overcharge, over-discharge, over-temperature, short circuit, crush and nail penetration may all result in a catastrophic failure, including the pouch rupturing, the electrolyte leaking, and fire.[20]

All Li-ion cells expand at high levels of state of charge (SOC) or over-charge, due to slight vaporisation of the electrolyte. This may result in delamination, and thus bad contact of the internal layers of the cell, which in turn brings diminished reliability and overall cycle life of the cell.[8] This is very noticeable for LiPos, which can visibly inflate due to lack of a hard case to contain their expansion.

For a comparison with LFP cells/batteries on this subject, please see LiFe cell safety

The simplest approach is to use a polymer matrix, such as polyvinylidene fluoride (PVdF) or poly(acrylonitrile) (PAN), gelled with conventional salts and solvents, such as LiPF6 in EC/DMC/DEC.

Other terms used in the literature for this system include hybrid polymer electrolyte (HPE), where “hybrid” denotes the combination of the polymer matrix, the liquid solvent and the salt.[25] It was a system like this that Bellcore used to develop an early lithium-polymer cell in 1996,[26] which was called “plastic” lithium-ion cell (PLiON), and subsequently commercialised in 1999.[25]

The performance of these proposed electrolytes is usually measured in a half-cell configuration against an electrode of metallic lithium, making the system a “lithium-metal” cell, but it has also been tested with a common lithium-ion cathode material such as lithium-iron-phosphate (LiFePO4).

Other attempts to design a polymer electrolyte cell include the use of inorganic ionic liquids such as 1-butyl-3-methylimidazolium tetrafluoroborate ([BMIM]BF4) as a plasticizer in a microporous polymer matrix like poly(vinylidene fluoride-co-hexafluoropropylene)/poly(methyl methacrylate) (PVDF-HFP/PMMA).[29]

High-voltage cells with silicon-graphene additive
New Li-ion battery cell technology has introduced a silicon-graphene additive that helps to preserve the positive terminal during discharging, thus increasing the cell longevity and cycle-life. An inherent side-effect when operating a 3.7V Li-ion cell above 4.2V is decreased cycle-life, with increased internal resistance.

The benefit of charging at a maximum 4.35V voltage is an increase of about 10% in energy density when compared to charging a traditional 3.7V cell of the same size and weight to 4.2 V. Li-ion cells marked as “high-voltage” compatible, if charged up to 4.35V, have a comparable cycle life to standard 3.7 V cells. A standard 3.7V cell should never be charged to above 4.2V as doing so can result in damage and/or fire. [30]